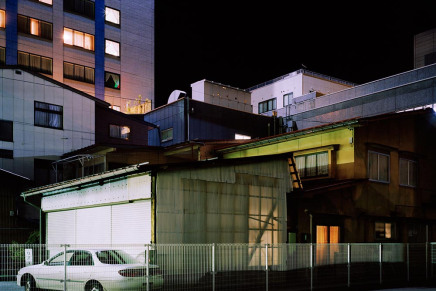 Sander Meisner is a self-taught Dutch photographer living and working in Amsterdam. Most of his photography consists of taking images of silent and sleepy urban structures usually in the dark hours. The inquisitive eye of Sander is good at finding beauty and visual appeal in neglected and unobserved corners and spaces and he spends a lot of time meticulously working at his huge film cameras. To a great extent, Sander is (intentionally) successful at drawing our attention to the change in our environment brought in by human activity. Some of his images seemed to me incredibly nostalgic whereas some brought in a kind of melancholy difficult to explain. The power of the photography of Sander slowly grips a keen admirer of good art and he begins to appreciate the vision of the artist when the latter captures not just an image but the interconnectedness… an emotional bonding that is there between us and inanimate objects. More from the photographer himself:

Please tell us about yourself and things you like:

I was born and still live in Amsterdam, the Netherlands. I have studied here to become a biomedical technician and still do this job next to my photography. As for things I like; at the moment I do not have much time for hobbies, all my time gets taken up by work and photography.

When did you start photography? How often do you go on a shoot?

I have been photographing since 2005, and realized I wanted to this on a more serious level in 2007/2008 after which I started to spend a lot more time and resources on my photography. I have a day job and try to build a photography career next to that which is getting more and more difficult to combine. I spend a lot of time on editing and sequencing of my work, and lately have been working on a book I want to publish. When I am not working on a project I do not take many pictures, about two to four in a month I guess. When I do work on a project I photograph a lot, depending on access to locations I can take many photos in a day.

What is your artist statement as a photographer?

I make images because I am having a dialogue with my surroundings and this is the best way for me to visualize that dialogue and show other people what it is about. A lot of my work makes things visible that cannot be seen with the naked eye, places at night that only become visible when I make very long exposures on the photographic film. Also I like the idea of the power you have as a photographer, when you make a photograph and show it to other people you basically tell them that the thing you photographed is something interesting, something that deserves attention and wonder. This can be a very strong and powerful thing.

Which camera/lenses and equipment do you mostly use?

I use medium and large format film camera’s. I mainly shoot at night and low light conditions so use very long exposure times ranging from 10 minutes up to hours. In these camera’s I shoot Kodak and Fuji color negative films. With the negatives I make scans on an Imacon Flextight scanner. Of these I do some minor adjustments in PS, then I make small digital prints of those files which I use for reference when making larger prints which I sell and show in exhibitions.

Tell us about your experience with film cameras in comparison to digital medium:

I mainly shoot with film camera’s because of the look it has, the dynamic range and sharpness look very different from digital. Next to that I like analogue prints much better than digital prints, they look much better too, the amount of detail in especially large format negatives is overwhelming, I cannot afford a digital camera that has this amount of detail in its files even if I liked the look these camera’s have.

Tell us about your achievements and clients:

I work with a gallery in Amsterdam which shows my work in exhibitions and art fairs in the Netherlands and abroad. I have had 3 solo shows, one with them and two in other venues. Some of my work is part of collections in the Netherlands. Next to that I made a book called Botanica with a publisher called the Velvet Cell, and have had a number of other publications in magazines and catalogues. Ocassionally I work for architectural firms to photographs their newly finished buildings for them.

What do you think about contemporary photography?

There is so much good photography around that it is overwhelming and sometimes makes me feel like my work is just one of many, however, I do hope that my work is at least somewhat different from other people, I try to do my own thing and try not to let photographers influence me too much. I try to look at a lot of cinema and paintings for inspiration.

Tell us about your preferred locations for shooting:

I do not have a particular area or region where I like to photograph, I think the beauty of photography is that you can shoot images anytime and anywhere. But I have been on trips to Japan and China the past years to make photos and am planning another trip to Japan in 2015 to make more work there. Last visit I made a few images which I really like and which I want to use as the start for a much larger body of work.

What are you up to these days? How do you stay inspired and motivated?

At the moment I am finalizing my work called Momentum, as well as shooting more images for a project called Auditorium. I hope to get more exposure and attention with these two new projects and hope to be able to show the works in more exhibitions outside of the Netherlands. Next to that I would like to do more jobs for architects (if you need someone to photograph your building for you, please give me a call?) And I hope to publish a book with the combined images of Momentum and Geometry of nowhere later this year.

As for photographers I like, that is a long list, but some favorites would be: James Nizam, Gursky and Christian Patterson. Of the latter I recently bought his book Redheaded Peckerwood which is amazing, it brings photography to a whole new level and includes much more than just photographs in its photographic narrative.