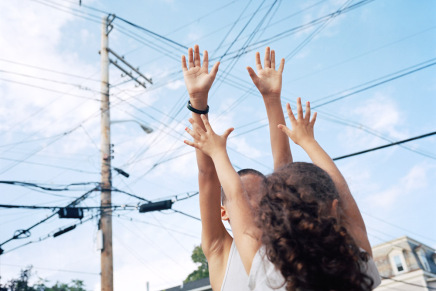 Born and raised in New York City, Paolo Morales lives in Providence, Rhodes Island, US. His documentary style people photography is very cathartic and philosophical. There are strong human elements spread in his images that spark desire, evoke fear, dissolve conflicts and generate an enormous feeling of well-being. The inter-connectedness of mankind is expressed in his visual frames no matter his subjects are isolated or in a union. Paolo’s photo series “These Days I Feel Like a Snail Without a Shell” is a sincere attempt at seeking relationships between individuals and environment around. It also serves as an urban exploration exhibiting ironies and perils of modern society. Here’s our simple interview with this very talented young photographer:

Hello Paolo! Please tell us about yourself, and things you like doing most:

I was born and raised in New York City and currently live in Providence, Rhodes Island in the United States. I studied photography as an undergraduate at the Art Institute of Boston at Lesley University and am currently in my final semester of graduate school. Before going back to school I taught at a photography school in New York and have taught at a couple other institutions since then.

Some of my hobbies and interests: eating medium-rare hamburgers (with some form of onion on top, and occasionally some kind of cheese), running (to run off all the hamburgers) and reading. I try to read every night before going to bed.

How did you get into photography and how often do you shoot?

I took a darkroom class in middle school (6th grade, I think) and later became seriously interested in high school. I took summer classes and was involved in extra-curricular programs.

I try to shoot a few days a week. Depending on what I am photographing, I might go out for a walk for a few hours or spend an afternoon or entire day with a person or group.

Tell us what you think about photography and what in your views make a photograph interesting and exceptional:

Photography is a tool to express an individual’s particular way or seeing or understanding the world. It’s a way to project your desires, fears, interests, and longings. I understand and am interested in straight photography—in other words, photographs that can be understood and analyzed based on the visual facts contained in the frame. Pictures are complicated, and in the best cases, can tell us more about what a photographer cares about or is interested in than any idea that a photographer tries to convince us to believe.

Interesting photographs tend to be a combination of good form and compelling content. In a general way, these pictures are often a mixture of transformative light and visual facts that suggest ambiguity. Ambiguous photographs, I think, contain information that simultaneously point to a statement and a question. To paraphrase Garry Winogrand, a photograph simply tells us what something looks like, and that’s all they can ever truly do. Exceptional photographs, I believe, do all those things and have an extra dose of inexplicable magic.

Photography is great because it’s a way to legitimize your interest in something or someone else. It was and continues to be a tool to access people and relationships that I wouldn’t have an excuse to investigate otherwise. I like to take and make pictures because it is a way to mitigate and express interest in others.

Which camera and lenses do you mostly use and what are your favorite settings? Also tell us about your photography workflow and your views on editing/manipulation:

The camera I use most often is a Mamiya 7 with a 65mm lens, which is approximately 32mm in 35mm formats, so it’s slightly wider than a normal lens. I like it because it is a light handheld camera. It’s great because it’s an aperture-priority camera and I can quickly change f-stops by simply twisting the lens. The camera allows me to respond immediately and efficiently when photographing. The negatives are scanned and are only manipulated to color correct and remove dust in Photoshop.

I have no issue with editing or manipulation as long as it supports (rather than undermines) the success of the photographs, either in idea or execution.

What is the core idea of your latest photo series and what does its very amusing title convey?

My current work “These Days I Feel Like a Snail Without a Shell” is fuelled by a preoccupation and desire to record and understand feelings of emotional dislocation. The work involves tenable yet fragmentary visual narratives pointing to a dislocated world inhabited by an un-revealed photographer-as-character moving through experiences without a shell while remaining in search of one.

In general, my work investigates the photographic virtues of observation and participation. I aim to make pictures that add up to a world populated by isolated people who inexplicably reach out and try to connect to others. I point to this tension in pictures through segregating and organizing subjects within a photographic frame. I am in pursuit of pictures that suggest fragmentation and isolation despite physical proximity.

The title is taken from an exchange between Hajime (the protagonist of a Haruki Murakami novel “South of the Border, West of the Sun”) and Izumi, one of Hajime’s several female love interests. Izumi asks Hajime how he feels about her, and further clarifies his feelings by asking a leading question: “you won’t hurt me?” to which he replies, “I won’t hurt you.” The dialogue between the two characters continues, and Izumi discloses to Hajime: “these days I feel like a snail without a shell.” I like the sentence because the conversation points to emotional instability, which is a feeling or state of mind I aim to project on to the people and characters populating the pictures.

What is your take on contemporary photography and issue of originality? How do you assess yourself as a photographer?

I met a photographer once who tried to convince me that originality and style in photography are conceits. Nothing is original—there is always a lineage and work is undeniably in conversation with the work that came before it. I don’t think style is legitimate either—I believe in aesthetics, and that aesthetics are adopted in service of whatever type of photography you are pursuing.

As a student, I’ve adopted the slightly problematic assessment of my work and self-worth as inextricably linked to the number of good pictures I took that week.

Tell us about your future projects, aspirations and your favorite photographers etc:

I find myself inspired by my friends and family, teachers, and classmates. Lee Friedlander and Garry Winogrand are probably my favorite photographers, partially because they are/were prolific and also because their best pictures are cryptic and clear. Recently, I’ve been looking at work by Thomas Roma, Robert Adams, and Alec Soth.

I have not had a feeling of greater enjoyment or happiness then going out into the world, interacting with people, and taking pictures of it. It is my hope and ambition to continue doing that for as long as possible.

I was browsing through New Yorker articles once and read an interview with a photographer named Duane Michals. In it, he recalls a conversation he had with his partner. Michals asks “why do you think we’re here?” and his partner replies “to take care of each other.” Michals then says, “I thought that was brilliant.” And I agree—it is brilliant.

Something to say to young photographers… like a tip:

There’s a sign above the elevator in a building I work in and it asks something like “did you make new work yet?” and next to it, it says, “great, now make more.”